How Many Pieces Of Pottery Did Picasso Create?

The question “How many pieces of pottery did Picasso make?” does not have a simple answer, like one might think. Pablo Picasso began his journey into the world of pottery in the summer of 1946, with a trip to the South of France. Inspired by the work of the Madoura Pottery Atelier, Picasso wanted to learn anything and everything he could about the medium. He found a teacher in one of the owners of the Madoura Atelier, Suzanne Ramie. This is how the famous Picasso Ceramics began. Suzanne Ramie shared her expertise with the artist and offered a corner of the studio to him to use for his practice. Picasso made the town of Vallauris, where the Madoura Atelier was located, his home from 1946 to 1955 and in this time he experimented with many different types of ceramics and decorative techniques. 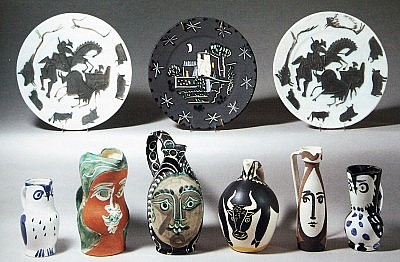 An assortment of Picasso pottery and ceramic pieces.[/caption]

Picasso Ceramics were made in plates, pitchers, vases, plaques, and more during this late period in his career. He produced over 4,000 original ceramic pieces. But that does not quite answer our original question of how many pottery pieces he made. This is because there are over 120,000 Editioned Picasso Ceramics out in the world that have been recorded. It is important to understand what “editioned” means in this context. Picasso created editions of anywhere from 25 to 500, meaning a batch of the same work made over again 25 times or 500 times, depending on the size of the edition. Each one gets numbered and signed, and are works of Picasso. Picasso collaborated with Madoura artisans to create these Editioned ceramics.

The Editioned Picasso Ceramics were originally sold to tourists of the area for cheap, but when the works became popular in Japan in the 1980s, the demand for them exploded and prices for these ceramics skyrocketed. Since then, Editioned Picasso Ceramics have become a hot commodity in the art market. Part of this comes from the fact that each editioned ceramic is catalogued in an extensive catalogue raisonne from Suzanne and George Ramie, the owners of the Madoura Pottery Atelier. Because of the wealth of reliable information, buyers know of and seek out these works to purchase. Sometimes the demand for an editioned work can exceed the demand for a unique original piece by Picasso himself.

The last piece of the equation for how many pieces of pottery Picasso produced, involves something called “Edition Picasso Variants.” These Variant works are Editioned pieces that are not part of the official count in the Ramie catalogue raisonne because they were for some reason decorated differently than the rest of the editioned pieces. There is no information on why these variants exist, but there are a few theories. These pieces could be possible tests of different designs and decorations before Picasso chose the final design, or maybe the Madoura artisans were playing around with leftover ceramics. Whatever the reason, these variants are unique in some way from the original design. There is no known catalogued number of these Variant Ceramics so there is no way to know how many are in existence. However, it is important to note, that these "variants" still carry the official Picasso signature and stamps used for all Picasso Ceramics.

So, how many pieces of pottery did Picasso create?

Well, I guess the short answer is there are at least 4,000 Original Picasso Ceramics, 120,000 Editioned Picasso Ceramics, and some unknown number of Edition Picasso Variants out there. It is clear that this ceramic phase in Picasso’s life was a productive one, with the sheer number of pieces he was able to produce. Something Picasso really liked about the medium of pottery was that it bridged the gap between fine art lovers and every day people. He liked that everyone had functional pottery in their home, no matter their class or status. Through his Editioned Picasso Ceramic works, Picasso was able to create a massive body of work able to reach thousands of people around the world, just like he would have wanted.