Georges and Suzanne Ramié are best known as founders of the Madoura Pottery studio in Vallauris, and the magnificent collaborations that they undertook with Pablo Picasso creating the wonderful and extensive oeuvre of Picasso ceramics. The studio, named Madoura as an acronym for MAison + DOUly (Suzanne’s maiden name) + RAmie, was inaugurated on April 29th, 1938 in an old abandoned factory.Suzanne Douly was born in 1905 in Lyon, France, a capital of textile working. She studied drawing and decoration at École National des Beaux-Arts from 1922 to 1926. While there, she explored the field of ceramics, but as a side to her drawing. After her schooling, she worked in a local textile firm. During this time she met Georges Ramié. Suzanne and Georges moved to the French Riviera in 1936 where each began new careers – Georges worked in arboriculture (the planting of trees), and Suzanne at an advertising agency in Cannes. It was soon after this move that Suzanne discovered Vallauris.Vallauris had been bustling with ceramic production in the 19th century, but currently was in economic decline. Suzanne’s Madoura Pottery helped to invigorate the artistic and particularly the ceramic scene in Vallauris. The Madoura Pottery was a family business, with Suzanne making the prototype ceramics, and Georges in charge of the firing. Their studio used an old “Roman type kiln” – which essentially means it was wood burning. This made for an uneven firing temperature and as a result each piece that was fired came out unique. The Ramié’s did not mind this – it made their work authentic. Picasso, however, did not appreciate the element of chance in the firing process, and eventually an electric kiln was installed.Suzanne chose to use earthenware clay which connected her back to a long tradition of ceramicists from the area going back to the 17th century. She studied old types and breathed her own life into them. She also took an more anthropological angle when she studied the ceramics of ancient civilizations. The Ramié’s were an essential part of the collaborative process in Picasso ceramics, but also left a mark on the ceramic world for their general ingenuity and skill. 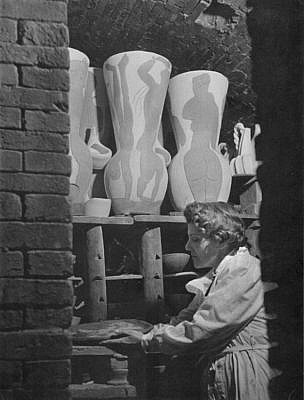