Chagall and Picasso, A Friendship that Wasn’t Meant to Be

As two of the greatest artists of the 20th century, Pablo Picasso and Marc Chagall were contemporaries and one-time friends. Their art couldn’t have been more different as Picasso leaned towards cubism while Chagall embraced romanticism. But their similar life experiences and successes made them the perfect companions as well as provided the catalyst for their eventual feud.

They were always aware of each others artistic output and Chagall held Picasso in high esteem throughout his early career. When Chagall moved to Paris in 1910, he wanted to meet Picasso and asked the poet Apollinaire to introduce them. Apollinaire refused, with the reply: “Picasso? Are you feeling suicidal?”. At that time, a meeting was not to be as Picasso was in the midst of creating cubism with Georges Braque. The rejection however did not sway Chagall from his admiration of his contemporary as he completed a drawing Thinking of Picasso in 1914 before returning to Russia.

After this almost brush, both of their lives and world events led them down very separate paths and they were not to officially interact until around 1944. It was during this time, that Chagall sent Picasso a letter from the United States (where he was living on political asylum) requesting to meet him. At the end of Second World War, the meeting finally occurred when Chagall was able to move back to France. Picasso was living on the French coast at the time near Vallauris, working at the Madoura ceramic workshop and Chagall traveled out to meet him. They hit it off instantly and frequently met up and corresponded for years until 1964 when their friendship ended.

As it is divulged, the friendship ended over an argument that occurred at a dinner party that Chagall hosted for Picasso and Françoise Gilot. The argument is rumored to have occurred such as this:

“When are you going back to Russia?” Picasso asked Chagall.

“After you,” said Chagall with a smile. “I hear you are greatly loved there [as Picasso was a Communist] but not your work. You try to make it there and I’ll wait and see how you do.”

As Picasso didn’t like that answer, he replied to Chagall “I guess with you it’s a question of business. You won’t go unless there’s money in it.”

This exchange highly offended Chagall and therefore he never spoke to Picasso again. With Chagall henceforth referring to Picasso as “the Spaniard” and sarcastically saying “What a genius Picasso is! It’s a pity he doesn’t paint.” He even created a work titled Tired of Picasso (n.d.) to express his new found distaste for the artist. 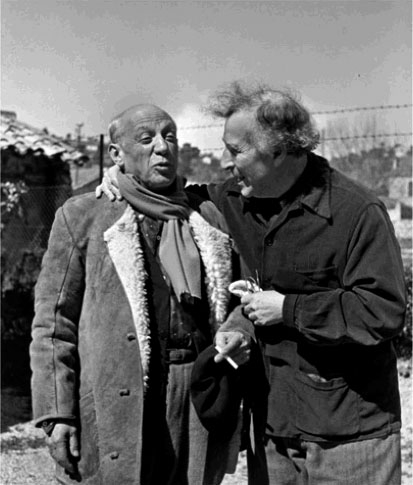 Picasso meanwhile was unaffected by the feud and slight, saying “When Matisse dies, Chagall will be the only painter left who understands what color really is. I’m not crazy about his roosters and asses and flying violinists, and all the folklore, but his canvases are really painted, not just thrown together. Some of the last things he’s done in Vence convince me that there’s never been anybody since Renoir who has the feeling for light that Chagall has.”

Full of egos, each artist has their own agenda in their dealings and Picasso and Chagall were no different. Perhaps more similar in values than Chagall cared to admit, Picasso and Chagall shared wonderful years together. Although they never collaborated, their influences can be seen in each others art with Chagall's attempt at embracing cubism in the work Cubist Landscape (1918) and Picasso’s attempt at romanticism in The Lovers (1923). The silence between the two up until their deaths is a rather sad ending for what could have been a very rich exchange, both artistically and personally. But at least, for a brief moment of time, two of the greatest artists in history shared dinners and ideas and the world is all the more richer for it.