Stella Retrospective at The Whitney Museum

Frank Stella: A Retrospective was on view at the Whitney Museum in New York  from October 30, 2015 to February 7, 2016. The exhibition displayed approximately 100 works, showcasing Frank Stella’s prolific career from the 1958 to the present moment. The exhibition was the first retrospective to be held in the museum’s new building in Chelsea and occupied the Whitney’s largest floor for temporary exhibitions.  Frank Stella was also the first artist to receive a one-person retrospective at the museum. The show was organized by the Modern Art Museum of Fort Worth in partnership with the Whitney Museum of American Art. The artist also assisted the curators in selecting and installing his works. The timing and location of this exhibition demonstrates the power of Stella’s legacy. 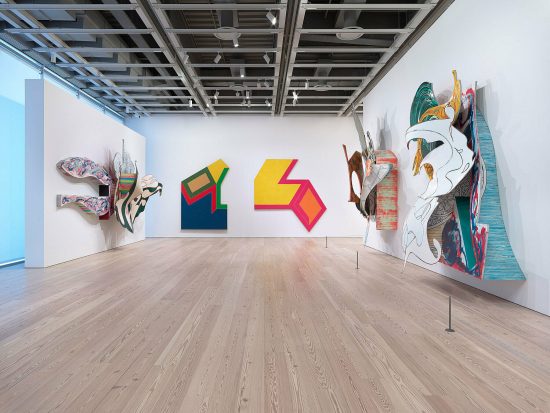 The show is displayed in loosely chronological order. Though art works from the same time period were displayed closely, works from differing periods would also be placed within the same room. The ultimate goal was to demonstrate the breadth of Stella’s career. 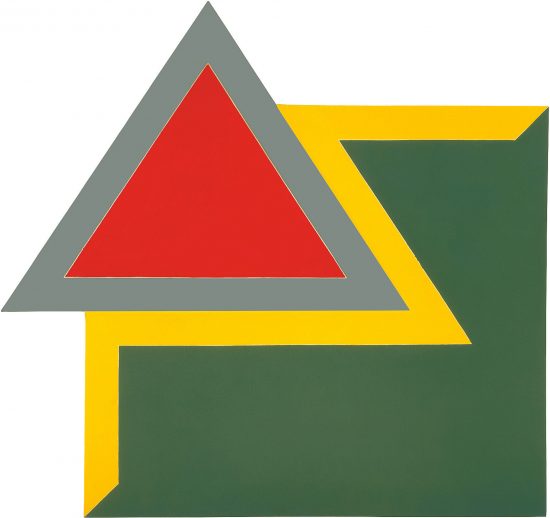 As expected, viewers were presented with “black paintings” like Frank Stella's Die Fahne hoch!, 1959 which were cornerstones of Stella’s early years. The white lines of the work are faintly painted, challenging the eye to adjust to the darkness in search of the lines. Despite the geometric precision of the work, the artist’s hand still shows. In this deliberately minimalist painting, Stella strips painting to its most basic form.

However, much of the exhibition was also dedicated to the colorful, abstract works which occupied Stella's later career. An example on display was Das Erdeben in Chili [N#3] (The Earthquake in Chile), 1999. This painting in particular showcases Stella’s clever use of titles a deviation from minimalism. The title was taken from a novel from the 1800's written about an earthquake in Chile. The novel’s influence on Stella unfolds beautifully on the canvas. The vibrant color and forms on the canvas reflect the chaos of an earthquake. Stella adds remarkable beauty to the concept of destruction. Additionally, it is a fitting metaphor as Stella shakes the art world with his artistic reinvention.

Finally, Stella’s sculptures completely eliminate the traditional canvas. Raft of the Medusa (Part 1), 1990 is a work from this category. At an impressive size, the metal sculpture appears as if its pieces were broken and then melded together. Despite the solid quality of the metal, the composition appears fluid and wave-like. The artwork was inspired by Géricault, who painted The Raft of the Medusa, 1818-19.  The dramatic painting depicts the shipwreck of The Medusa. In Stella's interpretation, a combination of metal curves and collides to form an intertwining mass. The sculpture appears destructed, balancing its identity as a both found object and a work of art. It is after all, a modern depiction of a shipwreck.  Dealing with nautical themes is familiar to Stella. He also dedicated a majority of his later period which pay homage to Herman Melville’s Moby Dick.

The impressive thematic and stylistic range in the artworks showcased two sides of Stella: one as the young visionary from Princeton and another as the older artist who continues to push the boundaries of his craft. His evolution is evidenced by the ever-changing materials of his work. As viewers progress through the show, shapes and colors become less and less confined to their canvas. If anything, this exhibition was Stella stating that he too cannot be confined as either a minimalist or an abstract expressionist.

Frank Stella: A Retrospective will be on view at the de Young Museum in San Francisco from November 5, 2016, through February 26, 2017.

Frank Stella and Moby Dick: A Whale of Imagination