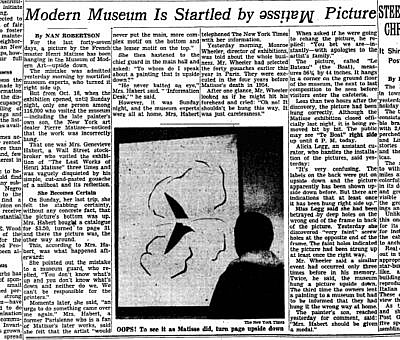 Oops! On October 18th, 55 years ago, an exhibit “The Last Works of Henri Matisse” opened at the New York Museum of Modern Art. It consisted of large cut gouaches – including Matisse Le Bateau (The Boat). Le Bateau is an image of a boat and its reflection executed in very simple lines and shapes. For 47 days Le Bateau hung upside down in the gallery until a stockbroker by the name of Genevieve Habert came to visit. Up until this point, none of the torrent of visitors, critics, the curators nor the art dealing son of Matisse, Pierre, had noticed the mistake. Habert claimed that it didn’t make sense to her that Matisse would make the reflection of the boat more complex than the boat itself. After returning to the gallery a few more times, she confirmed her suspicions by buying the exhibit catalogue and doing a side by side comparison. Indeed the Henri Matisse painting was oriented different in the catalogue. Pleased with her discovery, she told the nearest guard that the painting was upside down. He responded, “You don’t know what’s up and you don’t know what’s down and neither do we.” Slightly annoyed by the lack of response, she approached another guard who directed her towards the information desk. Unfortunately, it was a Sunday and the desk was closed. Habert, who felt she had to do something, contacted the New York Times who ran the story on December 5th, 1961. 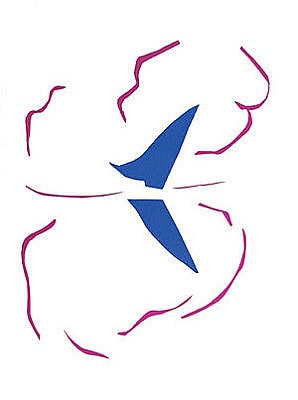 The error had been corrected the day before, within two hours of the direction of exhibitions, Monroe Wheeler, being notified. He was rightfully embarrassed and called the incident “just carelessness.” Alicia Legg, an assistant curator, blamed the confusion on a label on the verso posted the wrong way, as well as screw holes which implied it had been hung upside down before. Upon closer inspection, there were also screw holes on the correct side of the frame.

Cascone, Sarah. “This Day in History: The Museum of Modern Art Hung a Matisse Upside Down and No One Noticed,” Artnet. October 18th, 2016. Accessed October 19, 2016. https://news.artnet.com/exhibitions/moma-hangs-matisse-upside-down-683900