In 1986, Andy Warhol was entering his most fruitful artistic period. During this time, he became friends with younger artists such as Jean-Michel Basquiat and saw the return of his critical and financial success. In his Warhol Cowboys and Indians Series, Warhol makes the familiar choice of favoring popular imagery over what is historically accurate. In each of the ten screenprints, the cowboys and Native Americans are stripped of their historical context and presented as pop culture icons. Warhol therefore creates an ironic commentary on the mass mythologizing of the American West.

John Wayne was a popular actor known for his Western roles. His best known films include The Alamo (1960) and True Grit (1969). He won his first Academy Award in 1969 and was awarded a congressional gold medal after his death. 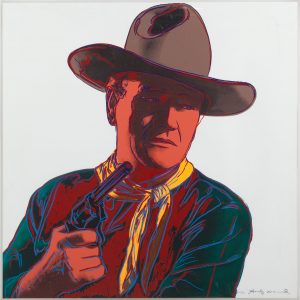 Annie Oakley was an American exhibition shooter and sharp shooter. She began shooting at the age of five in order to supply food for her family. Her shooting skills gained widespread recognition and she joined Buffalo Bill’s Wild West show soon after.

George Armstrong Custer was an United States Army officer and commander during the American Civil War. Though he had many victories as a commander, he is best known in American history for “Custer’s Last Stand”. The name refers to a battle he lost against a force Native American Tribes.

This mask came from Native Americans of the Pacific Northwest Coast. Beautiful and ornate, the masks are usually carved from red cedar and can represent supernatural beings or characters in mythology. 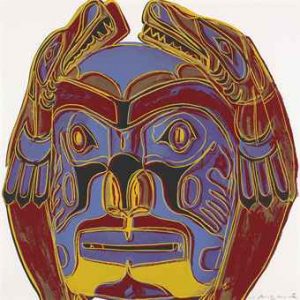 Shields used by Native Americans for battle are typically decorated with symbols which would empower the wearer. In this example, the shield is decorated with imagery of two antlered buffaloes preparing to fight.

In this image, a Native American woman is carrying a sleeping child on her back. Thy are dressed according to Western mythology and stereotype. This screenprint  intentionally exposes the cultural misconceptions associated with this image.

Geronimo was a prominent leader of the Apache tribe. From 1850 to 1886 he carried out many raids against US and Mexican military forces. In 1886 he surrendered to U.S. troops and spent the last twenty years of his life as a prisoner of war. Nevertheless, his celebrity status remained.

Also known as the Buffalo nickel, this copper five-cent coin was designed by James Earle Fraser and in use from 1913 to 1938. The design was approved in 1912 and despite some objections, were issued successfully.

Theodore Roosevelt Jr. was the 26th president of the United States who served from 1901 to 1909. He was known for his vivacious personality, and his “cowboy” persona. He is best remembered for his foreign policy, ecological preservation and the Progressive Era.