A few different narratives exist for how Pablo Picasso first became enthralled with the field of ceramic art. It is agreed that in the summer of 1946, Picasso and then lover Françoise Gilot were vacationing in the south of France in a small town called Vallauris. Picasso and Gilot attended the annual Vallauris ceramic fair and there met Georges and Suzanne Ramié. The Ramié’s were owners of the Madoura pottery studio and quickly became partners with Picasso in his ceramic works. Picasso ceramics, also referred to as Picasso Madoura ceramics and Picasso pottery, come in all forms – one of which is the plaque. Like Picasso's work on other ceramic forms, he experiments with all sorts of themes on the plaques, as well as conceptions of space.

Picasso began creating wall plaques with more fervor in 1955 when, after splitting from Gilot, he moved to La Californie, a villa close to Vallauris. He had his own ceramic studio there, but continued to decorate pieces from the Madoura studio.

It was also around this time that Picasso met Jacqueline Roque, and became deeply enamored. She began to feature more and more on his pottery, including Picasso ceramic plaques. In the plaque below, the delicate profile of Jacqueline is defined by the brown on a contrasting ivory background.

Picasso is well-known for his work with human faces, and this was a theme that he continued to explore on his Picasso Madoura ceramic plaques. Even on a new medium, Picasso’s unique work with facial features continued to shine. Picasso uses the entire canvas of the plaque to create a face, and certain portions continue off the plaque, giving an effect that is larger than the actual space of the plaque itself.

Some of Picasso ceramic plaques are glazed, while others, such as the one featured below, are plain earthenware. Though perhaps simple looking compared to the more elaborately glazed pieces, the unique hand-made stamps that Picasso uses to delineate the facial features add a perfect flair of 'quintessential Picasso' that delights. 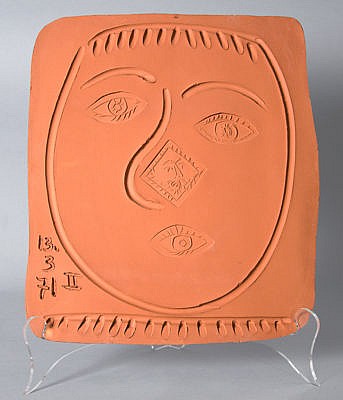 To learn more about collecting Picasso ceramics visit our guide and a short discussion on stamps and markings.

Check out our collection of Picasso Ceramics

Pablo Picasso in Vallauris, a Place for Invention: Linocuts, Ceramics and Love

Pablo Picasso and his Woman, Picasso’s artistic style thru the years