In honor of the 4th of July, we will be looking at famous American artists in our collection who have left an impact on the art world and perhaps the most important one is Andy Warhol:

Warhol’s works explore the relationship between artistic expression, celebrity culture and advertisement. His art used many types of media, including hand drawing, painting, printmaking, photography, silk screening, sculpture, film, and music. He was also a pioneer in computer-generated art using Amiga computers that were introduced in 1984.Andy Warhol grew up in Pittsburgh, Pennsylvania where he struggled as a child but found solace in his mother, art and music. After graduating high school, he enrolled in the Carnegie Institute of Technology in Pittsburgh, where he studied commercial art and grew to have a successful career. Bored with the behind the scenes work however, Warhol soon created his own art and became a world-renowned, and often controversial artist.

Pouring his creativity into many artistic pursuits, Warhol lived a life full of opportunity and connections. However he passed away unexpectedly after a routine surgery in 1987, leaving behind the most successful oeuvre of any artist and having what he wanted most: wealth and fame.Outside of art, Warhol founded Interview Magazine and was the author of numerous books, including The Philosophy of Andy Warhol and Popism: The Warhol Sixties. He managed and produced the Velvet Underground, a rock band that had a strong influence on the evolution of punk rock music and his studio, The Factory, was a famous gathering place that brought together distinguished intellectuals, drag queens, playwrights, Bohemian street people, Hollywood celebrities, and wealthy patrons. 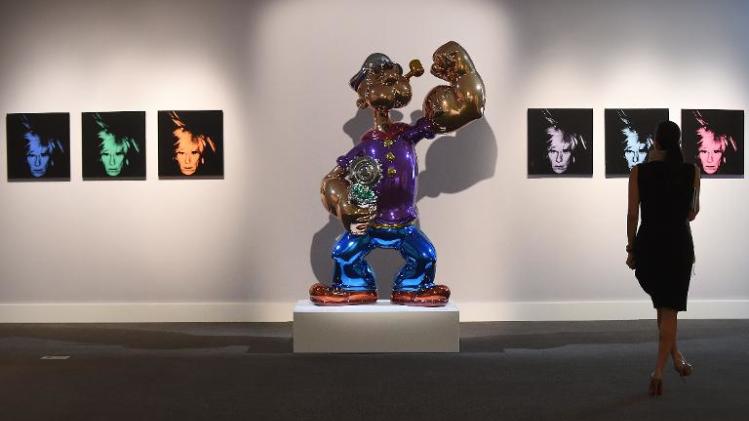 “Popeye” by Jeff Koons and “Six Self Portraits” by Andy Warhol

Warhol’s legacy today is perhaps a movement bordering on a religion with his influence seen in every aspect of commercialism and the art world. His art is being used in every shape and form, from post cards to t-shirts to bags. The lessons he learned during his career with having a publicity machine and his own sector of the marketplace are all Warhol’s own deliberate strategy, but have now been appropriated by Keith Haring, Richard Prince, Jeff Koons, Damien Hirst, Takashi Murakami, and other artists who have achieved art stardom. They reference consumer products, practice corporate-style branding and self-promotion, and even engage in factory-like production—often in the unabashed pursuit of wealth or, at least, celebrity. And all of this is acceptable because Warhol paved the way.

Warhol enabled artists to take control of their art and utilize it for their own means. Warhol led a revolution and the successive generations of artists that have come after him are reaping the benefits, and will continue to, which makes him the most influential American artist and one we Americans hold dear as he represents the American ideal of being a first generation American who came from nothing and made something of himself in spite of the hardships faced.